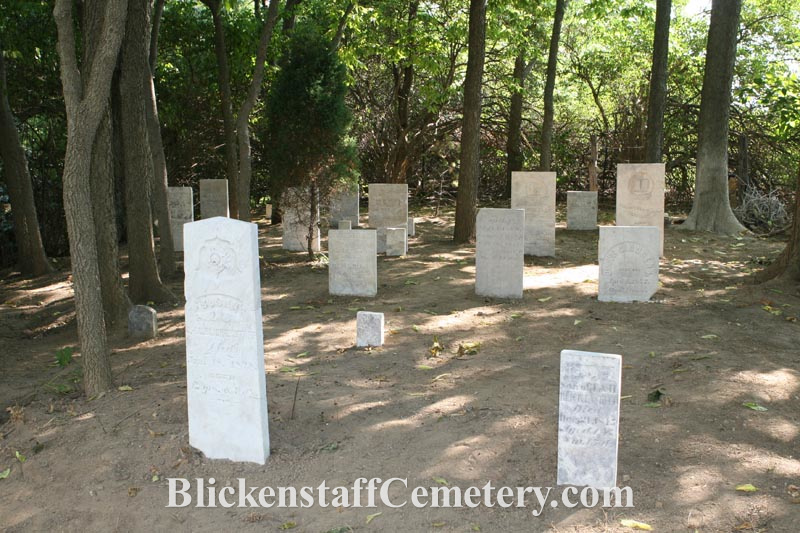 Blickenstaff Cemetery overlooks a small creek in Monroe Township, the southern edge of Miami County, and is located on land that was part of a tract deed to Michael Fairs heirs in 1812 by President James Madison. Land grants to Jacob Fair and Jacob Blickenstaff, brother-in-law of Michael Fair, were for adjoining lands. The cemetery is also known as the Karns Cemetery as Michael and Elizabeth Blickenstaff Clark Fair's daughter, Catharine, married Abraham Karns. The Karns were deeded the property in 1838 by the other heirs of Michael and Elizabeth and built the brick house which still stands today on the property with the year 1856 scratched into a brick on the south side of the house. They owned the property until Abrahams death 52 years later in 1890.

Michael Fair and his second wife, Elizabeth Blickenstaff Clark (widow of Thomas Clark who laid out the town of Tippecanoe), came to Miami County about 1806 from Frederick County, Maryland. Michael died in 1809 and his is the first known burial in this cemetery although there is a possibility that Michael and his wife, Elizabeth, had an infant daughter who could in fact be the first burial. The last known burial in the cemetery was that of Christian Blickenstaff, brother of Elizabeth Blickenstaff Clark Fair, who died in 1865.

History of the Blickensderfer Family in America by Jacob Blickensderfer (1816-1899) mentions specifically several of the individuals buried in this cemetery giving the exact wording from their marker inscriptions so it is evident that Mr. Blickensderfer either visited the cemetery himself or corresponded with someone who had been there. His book indicates that there is no monument marking Elizabeth Fairs grave so it is likely that if her grave was marked at all that it was with a field stone. Two earlier readings of the cemetery do not include Elizabeth or Michael.

Letters written by Samuel S. Smith to local historian Grace Kinney in the 1930s indicate that cattle had been allowed to roam the cemetery and that at that time markers were down and broken. It was evident in 2006 when the cemetery restoration project began that the cemetery had been neglected for many years. Dorothy Anderson Thompson of Sidney, Ohio, who lived in the house in the 1940s and early 1950s, stated that her father attempted to keep the cemetery fenced in and the grass cut and that many stones were lying flat. When our restoration project started, the cemetery was overgrown, filled with trees, and had a large amount of bricks and other debris in it. It was also infested with ground hogs that had burrowed under many of the downed markers and established an elaborate system of tunnels. Several wooden corner posts were still standing marking corners of an area approximately 35 feet square (although the cemetery deed appears to convey an area 66 feet square).

Two prior readings of the cemetery were found, one contained in Miami Valley Records Vol. 5 Miami County Cemetery Records by Lindsay M. Brien. It is believed this reading was done in the 1930s. The second reading was done in March of 1977 by Don Bowman who was in the area doing some survey work and came across the cemetery. The Brien reading is an alphabetical listing and does not mention any field stone markers. The 1977 reading by Bowman was a row-by-row reading which included references to field stones, loose bases and loose pieces of stone.

In April of 2006 with the gracious consent of the owners of the residence and barn adjacent to the cemetery, a group of descendants of the Fair and Blickenstaff pioneers buried in the cemetery spent several Saturdays cleaning the brush and debris from the cemetery. When this was cleared, the true sad state of the cemetery was revealed and a decision was made that a complete restoration and stone repair project should be undertaken.

Many hours on subsequent Saturdays were spent probing the ground for markers buried when the tunnels of groundhogs collapsed or which had been buried by their diggings. Piece by piece missing stones and their fragments were pulled from the earth with the largest and last marker found being the five foot long fully intact marker of Mary Ann Blickenstaff McClure which was completely buried approximately two feet deep on the west slope of the cemetery. The markers of Jacob Fair, Mary Fair, Olive Maugens, Catherine Blickenstaff, and Mary Ann McClure were all totally buried. Foot markers for nearly every burial were found. The crispness of detail of the engravings of the buried stones in many cases was remarkable.

Professional stone restorationists Helen Wildermuth and Mark Davis from Indiana were employed and in August of 2007 began several days of work cleaning, repairing and resetting the markers. Using only water and special plastic brushes mounted on drills, they cleaned each marker revealing in most cases beautiful, white Italian marble.

In August of 2008 a blank, unusable bottom portion of one of the tablet stones was engraved Blickenstaff Cemetery Est. 1809 and installed in the west row of the cemetery. A plaque placed on the back of this marker commemorates the restoration project and reads as follows:

A ceremony was conducted on August 29, 2008 to commemorate the completion of the restoration project and dedicate the plaque. Since it is believed that most of those buried in the cemetery were of the Old Order German Baptist faith, Rev. Ronald L. McAdams, a retired minister of the Church of the Brethren, was present in period costume to offer a prayer and rededicate the cemetery. An excerpt from his service follows:

We gather here today in this place to re-dedicate this cemetery and our thoughts automatically go to the past. As we see urban sprawl grab up prime farm land, as we see hundreds of new people moving into this area who know nothing of the history of the land upon which they are making new lives, we recognize that time marches on and that those voices that rang out here in this area in the 1800s have been silenced. We realize therefore that it is an important thing that we do in gathering here today.

It has been nearly 200 years ago that the pioneer families stood on this spot for the burial of a loved one. They prayed to God for comfort. They mourned the loss of a dear one. We come to dedicate a plaque and dedicate this cemetery so that those who come after us to this place might catch a glimpse of the history that we share.

The new 2008 reading of the cemetery follows. The reading is from north to south beginning with the
row furthest west and the exact wording of the marker is given (as read to the best of our ability):


Conspicuously absent from the above reading are Michael Fair and Elizabeth Blickenstaff Clark Fair. Elizabeth is mentioned in History of the Blickensderfer Family in America as being buried in this cemetery without a monument marking her grave. It is likely that #17 or #18 above may be the graves of Michael and Elizabeth. Also absent from the above list is Mary Favorite Fair, wife of George Fair (son of Michael Fair). She died before 1860 at a time when family was still being buried in this cemetery and her grave has not been located in any other area cemetery so it is likely she is in fact buried in Blickenstaff. Her husband, George, died in 1888 and is buried in Maple Hill Cemetery in Tipp City, Ohio.

List compiled from combined readings done around 1930 to 1932 by Lindsay M. Brien and reading done in 1977 by Don Bowman and supplemented from 2006 project information

Also known to be buried in the cemetery but with graves probably marked only with field stone are:
FAIR, Michael, died 1809
FAIR, Elizabeth Clark (maiden name BLICKENSTAFF), born about 1772, died June 6 1839.
These graves may be located in Row 4

From the Local History Library as a result of research my Mary R.:

"The Maugins - Blickenstaff Families of Miami County (from the files of Elise H. Lindenberger - 1968-69)". Mentioned in the manuscript is John Maugens, father of Mary Maugens born in 1847. It also mentions Olive Maugens who died 4/4/1857 and a Miami County guardianship for her children, David K. and Mary A. Maugens, as well as a marriage record for Olive Jenkins to John Maugens in 1844. A letter in this manuscript dated 1968 says that Elise Lindenberger was not able to find the Blickenstaff Cemetery when she surveyed cemeteries in the 1960's and mentions that the cemetery survey done by Lindsey Brien was done ca 1930-1932.